I have had the pleasure to direct Kool A.D.’s "Prove It" official music video, made with both ASP11 and Harmony12 :

Watch it premiered on Pitchfork, and relayed by The Fader, etc. 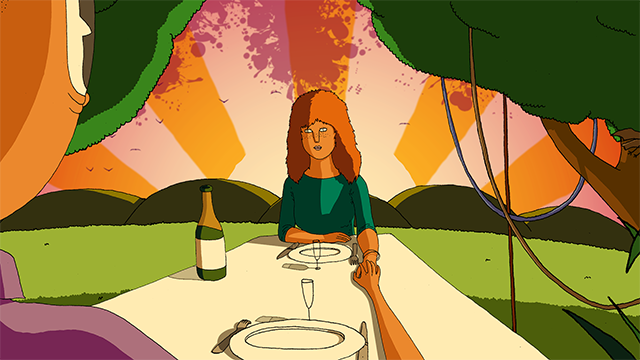 Nice job. (even if not all of the content was my cup of tea, though that's neither here or there) but your color palette is really rich and unique, you have a strong "golden hour" of light effect that I enjoy watching.
Little Yamori
Creator at http://www.IslandBuddies.com

really nice work with a strange atmosphere. Well done !
The guy from the other side.
Top

This is amazing. AMAZING. Great style, for a start. Great colours. Some of the movements were really really good, and you didn't shy away from complicated stuff.

Could you break it up a bit as to which parts were done in As and which in Harmony? I guess the b/w dream sequences were Harmony since they were FBF. How many people were involved, in which time?

I had some trouble reading the superimposed parts, I think these shouldn't be used often in animation. Also I couldn't really follow the story, but that's not important. Important is that I wanted to watch it to the end.

Oh wow thanks a lot Slowtiger!!!

You have seen it just right : most 24fps frame-by-frame sequences were made with H12 indeed, and imported as specific layers into ASP. Not all of them, however : several were drawn on paper/lightbox too, such as the ones with the captain/boat for instance, as well as most of the 12fps ones with the dog & bunny, sea shore backgrounds, birds and a couple others.

(This one finally got discarded)

All sequences involving rigged characters/elements were made in ASP of course, and the credits were written with ASP’s freehand drawing tool as well, which I find a little less convenient and accurate for color drawings — or should I say, with which I am not familiar enough yet, in addition to the fact that I still find the paint bucket fills/refills slightly approximate.

Every scene however was set up in ASP, and exported into various layer comps (another tremendously convenient feature), themselves edited/mixed in Final Cut Pro 7. 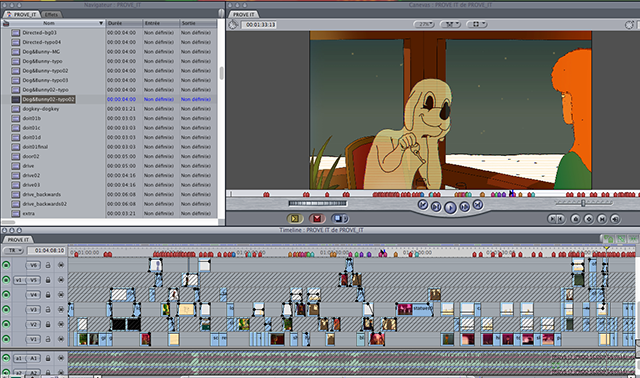 This very video turned out as a kind of hingepoint for me, in terms of workflow : even though still relying to ASP since 2007 (and I do intend to keep it that way, ASP is too cool and handy), with a slightly different approach for every new piece of work, this vid was my first time with two very complementary animation apps instead of one (in addition to the lightbox of course), and it has proved a good balance for me so far. I am however pretty confident that ASP will improve as a frame-by-frame tool, which may still lead me to switch techniques again (and I love that).

It has to be said that I have been practising a lot to improve my knowledge of ASP for 2 years — especially regarding character rigging, which I had somehow neglected for a while, out of the frustration of not being able to combine frame-by-frame AND vector animation. Those attempts led to an online lab with random exercises, work-in-progress snippets and excerpts of commissioned animations. I also now build up most of my illustrations with ASP, as though ready-to-animate scenes, thanks to this other training place, with some short animated extents, and even an animated work-in-progress, haha!

I would by the way strongly suggest every novice and/or self-taught animator to create such a place for themselves, as it does prove very rewarding in terms of learning and improvement. As true as it is for everything else of course, I will add to the choir assessing that the secret of animation is not only "concentration", but a HELL amount of work and passion. Let’s rock folks!

However thanks again for your kind and encouraging feedback!

Oh yeah, and as for how the time required to complete this music video, I would say 2 to 3 monthes (a record compared to my former 1 month-per-minute pace for B&W 12fps animation), yet with 12-hour minimum workdays to keep to the agreed deadline... A great time for sure, but the last fortnight of "holidays" has been very welcome.

Incredible job on this, Ronald!
The breakdown of your process and thoughts are very much appreciated as well

Loved it Ronald, you always push boundaries , the colour and design is excellent and I love the visual poetry you use.
Superb.
Sequential offender.
my latest animations
Top

That's great and this was really amazing man!
Jimmy Mills

This is a really great piece of work. I love the colours and the quirky design. Excellent!
Top

Watching this video is like a trip. Having two scenes at the same time in different stiles is a great idea.
Top
Post Reply
17 posts