Hi everyone,
been playing around with that awesome "smart bones for switch layers" script, written by Heyvern, which I randomly ran into at http://www.animestudiotutor.com, and thought I would share a couple snippets of my recent errands here.
Oh by the way HUGE THANKS Heyvern, now I'm an addict.

1°) Just a short manga-style loop to start with...

... which also landed on my illustration Tumblr account : http://blogpeeps.tumblr.com

2°) My vain researches to put this script into practice and create a smashed window however led me to Heyvern's script. It gave me the idea to fake 3D moves with bitmap images -- and that is when the addiction took place. The minute I tried the "smart bones for switch layers" script I knew I was doomed.

1st attempts -- yes the script DOES work, of course it does. The "3D moves" are far from being perfect, but it was far enough for me at that time :

The final sequence might not be a masterpiece (the room itself lacks furniture, detergent on the table, etc), but it was so much fun to at least have a script which, on the principle, could help prepare such a sequence, with the drone and the kid moves, that it was self-sufficent as such.

4°) Yes I am so brilliant that I even ended up understanding that I could also set up spaceship mutations (it took me 3 days to figure) :

Since then my mind is blocked on that last back and forth shapeshift : please help me my brains hurt.

Talk soon, and thanks again Heyvern! A lot.

I like the characters and their movement, but the background doesnt fit. Try to skip the blur and use the same lines as in the animation. You can sepearte the BG from the animation by using a different, subdued colur set.

That little guy seems to slide around in the scene. Take care to change his overall direction in the turn only.

I recommend you concentrate on character movement, not on the flying gimmicks: they're not important.

Thanks Slowtiger for your feedback!

As perfectible as those drills may be (and they are, for sure), they will however stay unchanged — they are mere attempts on-the-go, and published as such : http://blogpeeps.tumblr.com

The laundry snippet could surely be improved indeed, at least the table feet could to begin with

. But I like to leave such mistakes/imperfections as they are, in such leisuretime trainings, in order to maybe re-use them later, put differently.
As for the background though, it does fit pretty much to me as it is, slightly blurred and all, and I dont see any reason why it should be replaced — and it is, however, already set on a distinct layer.
The kid in the yellow radiation suit does seem to slide around a little indeed, because I haven’t drawn enough turning positions : the effect is, consequently, not very realistic, and the poor little guy moves a bit like an alien aircraft in Space Invaders that’s true, but also, mind you, like a mutant kid whose gestures are too fast for regular adults to percei… no, ok, he lacks some turning positions, you’re right.

Nonetheless, regarding character movements, here’s an unrelated little smart bones test I made prior to all that :

Yes it IS stupid, and wasn't supposed to end up so. But I think I got the trick with smart bones now.

I wouldn't worry about the little guy turning while walking, as I read that as him keeping an eye on the drone he was controlling.
- Wes
https://www.youtube.com/user/synthsin75
http://www.kelleytown.com/forum/animators/default.asp
http://mohoscripting.com/
Top

Yes that is exactly the case, the kid tries to keep track of the drone, both with bare eyes and on his remote control pad, except he accidently loses it at the end, and the toy crashes. Oops.
Work : http://www.ronald-grandpey.net/?animations
Blog : http://rrolab.tumblr.com
Twitter : http://twitter.com/peep_s
Top

Very cool stuff. You definitely have a unique character style that's consistent. That new script seems to be like a new toy at Christmas. Looking good with what you've worked out so far.

Thanks Little Yamori!
Yeah that script is awesome, and I am eager to test Selgin's tricks ASAP too!
Work : http://www.ronald-grandpey.net/?animations
Blog : http://rrolab.tumblr.com
Twitter : http://twitter.com/peep_s
Top

Just another little something. The animated GIF version is a bit heavy (5Mo), but I won't post it on Youtube before the full reel is completed.

cableon wrote:Just another little something. The animated GIF version is a bit heavy (5Mo), but I won't post it on Youtube before the full reel is completed.

Nice one. You should try to offset the boat and the camera movement a little. Both are moving by the wave, but the boat movement should be some frames before the camera (or after, depending of the wave direction). Rotating the boat in Z faster and at different time could help too.
Of course, it's just an opinion

Haha, wicked but very true! There aren't 'real' camera movements here, just smart bones controling vector layers, but I get the delay principle and will get you updated as soon as it is rendered and converted into a gif (which may take a little while, regarding the clouds &raindrops).
Thanks, Selgin! 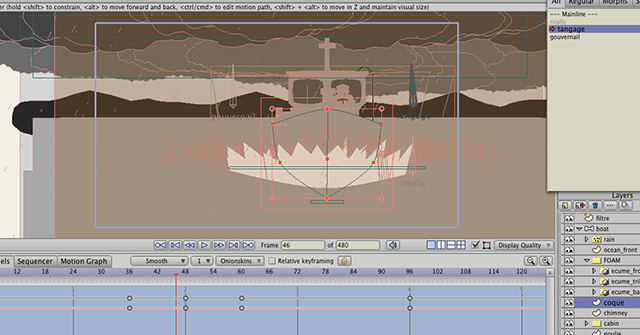 .... Hum, the tweaking thing did not quite work for the boat, but I have made a couple more sequences since, and have put up a basic blog here :

Haha, yeah the very last one is a private joke, and was made pretty quickly. As for older sequences, they do mostly consist in rigging exercises, even though sometimes getting back to image per image, which I still miss. I would love to find a solution allowing a mix of both, for instance with switch layers attached to smooth joints for bone pairs, in order to preserve the "trembled", random aspect of 12fps bitmap animation, without relying on vector shape noisy outlines. Or maybe I am dreaming of a more generally, and more accurately drawing-oriented ASP. Or maybe I still need (a lot) more pratice.

Really brilliant animations on your website. The animations at the top of this post using the switch layers script, were they mostly created outside of ASP and brought in to the layers? They look like they were drawn in another program and not Anime Studio.
http://justaddmotion.blogspot.com.au
http://djsketchpad.blogspot.com.au/
Top

Hey thanks a lot DJWaterman!

Every animation/loop displayed above was made in ASP indeed : for some of them (the big bearded dude, the drone/washing machine, etc) the drawings were simply made by hand on paper, scanned &imported as bitmap image sequences, stopmotion style, before assigning bones to the corresponding image layers.

The thing is I really do miss 2D stopmotion a lot, as in the music videos, etc that you have seen on my website, but that I have grown addicted to bone rigging nonetheless after a year of effort and practise to take full advantage of all ASP functions (Selgin's amazing ease in his presentations, animations, demos & tricks have helped a lot, too). I now find myself dreaming of a way to mix both, with bone-controlled stopmotion moves (especially character turnovers, and rotation moves in general) avoiding to draw every tedious interval -- or switch layers attached to smooth joints for bone pairs, so that any object, folding limb, etc could be animated as an autonomous bitmap loop/sequence just like any other static layer.

I have recently been getting familiar to ToonBoom, which I had quickly discarded in favor of ASP back in 2008 while starting color animation, and a better raster engine and an accurate freehand bitmap tool might perhaps be a great add to ASP, too -- as well as, even more urgently, a depth/Z axis grid to visualize and handle layer placement, perspective, etc more easily. Still not completely convinced by TVPaint so far, as again I have grown fond/familiar of ASP's bone rigging system.

But again, what do I know ? Just feeling divided between two very different (incompatible ?) techniques, cutout & 2D stopmotion, and very frustrated not to be able to draw more with vector/cutout animation -- I mean REALLY draw. The only way that I can see is persevering in both techniques, until hopefully finding a solution to that dilemma. Wish me luck.