Following my own advice, I did a test to see if a bent leg looks as nice as a leg made from several stiff parts. The body is layer bound to one bone, the legs are warped. As you see the woodcut lines bend nicely. It took some effort however to make it behave like that. I placed bones along the outline of each leg to prevent it from too much bending and reduced all bones strengths. 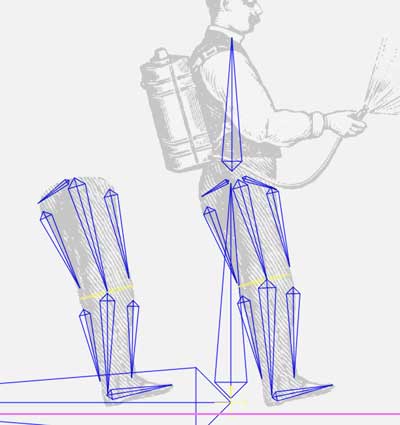 Also I had to fiddle with bone scaling during animation to make each leg look like it keeps its length, paradoxically. As with all images onion skinning was no option, so I had to adjust the feet blindly in order to stay on the ground.

I'd like to point you to the work of Karel Zeman (http://en.wikipedia.org/wiki/Karel_Zeman) who used woodcuts a lot in his films, in combination with real live actors. I like to think that he would've worked with computers and AS if he had had the chance. I found a documentary ou youtube which gives you a good impression of his style: http://www.youtube.com/watch?v=EjGl8rebvQc
Top

nice work slowtiger, the deformation of the textures seems to work nicely

Thanks for the demonstration. I suppose the moire effect on the legs is inevitable, or perhaps it's just caused by the resolution of the
image. I have admired Karel Zeman's work for many years. His films and techniques are described in Harryhausen's last book;
A Century Of Stop Motion Animation.
Top

Well done. I don't know if the jagged walk stalk was done on purpose, but it adds to the antiquity style of the woodcut art.
Top

Nice work, slowtiger. Makes me think of Larry Jordan a San Fransisco animator who used engravings for his surrealistic animated collages.
Is there any place to download such images from? How did you get those images?

I bought them. Dover Publication is a publisher who offered books and books with collected woodcuts and steel engravings from around 1900. Additionally I have some books by Gustave Dorè, and a few illustrated period technical books. I wish I'd have the sheer volume of source material as it's described in "Max Ernst: Inventar und Widerspruch" by Werner Spies, or at least a copy of La Semana Santa and La femme a 100 tetes, each.

But nowadays you can be lucky if you use google cleverly. Set the results to b/w or gray only, or to .gif, when you use the image search. I expect to get some more results from all those ongoing book scanning campaigns. I remember having found a nice site with only illustrations, but don't find the link now.

If you really want to dig deeper, root your local library.
Top

Hi,
Watch out for CONTACT, RECOIL, PASSING and HIGH-POINT :
see link below:
http://www.idleworm.com/how/anm/02w/walk1.shtml

More woodcut animation. I found this nice cut of a double bike and separated and rigged it: 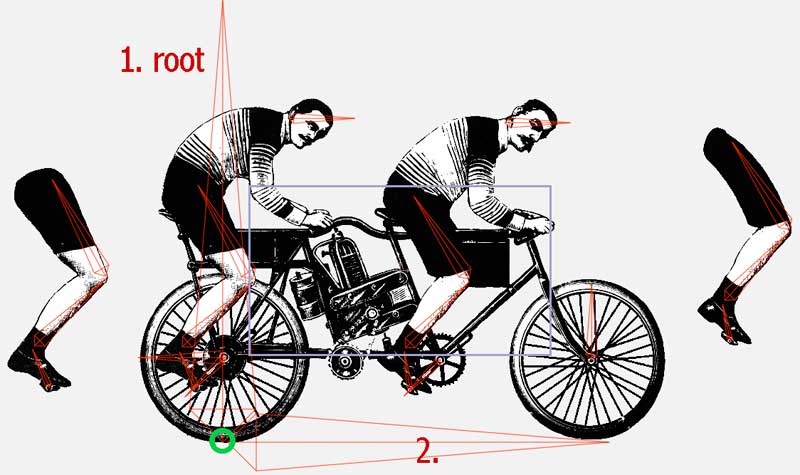 As you see the leg bones start from the pedals up. It was easier this way than the other way, and the black trousers hide any incorrectly placed thighs. (Have to overwork the knees, though.) Everything is connected via layer binding.

I kept the wheels in a separate bone layer because they have their own different speed. Still it was placing keys on every frame for the actual pedaling. You'll notice it's not really "round" - that's on purpose, but I think I will rework that, too, and make it a bit jerkier because it fits the style better. Overall I want to maintain a certain stiffness to the characters.

As you see some images are used multiple times. I found an annoying behaviour of AS here: if I change the source image, I have to re-import each and every instance of it (via the "source..." tab), otherwise AS will still render the old version. I'd like this to be improved, maybe with an optional dialogue asking wether I want to replace all or just this instance.

Also I'd like to work with smaller preview images which could reduce rendering time drastically. My ideal setup for this would be a table listing each and every image of a project, with three columns, one for the layer name, one for the preview file name, and one for the hi-res file name. AFAIK not even AfterFX has an asset management like this.

Rendering of such a project takes clearly longer than your usual vector stuff. I think I'll be faster if I render a loop of the bikers first as a QT file, then import this and do the ride over the hills. This is the same as the concept of "nested projects" or "pre-rendered compositions" in AfterFX.

Doing a ride over an irregular path like this is easy if you set the point of origin of the biker bone layer to one of the wheels' contact point to the ground (I chose the back one). I made the wheel go round once in 48 frames, so I placed a key every 48 frames for the layer translation (1). I found the distance easily: by just measuring the wheel's diameter on the screen and multiply it with pi. (Yes, I use a real life ruler on my screen.) Then I adjusted all those positions vertically, and inserted more keys where necessary. In a second round I adjusted the layer's rotation (3) at each of those keys so booth wheels had contact to the ground all the time.
Top

Thanks for the post ST, looks way cool, there's something very amusing about those woodcuts when they animate.
Madrobot and I were talking about incorporating a woodcut sequence into a flik using AS last year, I did some tests but they weren't nearly as cool as these. Probably trying to generate the woodcut effect as well was not such a good idea. You have definitely set the standard though.

WoooHooo! Reminds me of those absolutely wonderful "beer" commercials done with old style cut out style characters. Forget the beer or product the commercials were advertising.

For the "onion" skin with images there is a very simple trick that I've used. On a vector layer above the images draw simple shapes that match the outlines of the image layer drawings. They should react in the same way to the bones as the images do. Maybe just the feet if that's all you need. Now you can turn on onion skin and those shapes appear as proxies for the image layers.

If you close and reopen the AS file all the images are updated if they are changed out side of AS. Is this the problem you have?

As for "low res" proxy images that is also a fairly simple trick. I've used this before.

In your "project" folder or anywhere you want, create two folders. One folder holds hi res images the other holds low res images. The image files should have the exact same names in each folder. They should also be the same aspect ratio or proportion. Doesn't matter the pixel size or resolution as long as the proportions or aspect ration is the same.

Create a third folder that holds the images used by AS. This folder is the folder to contain the images linked or imported into AS, either hi res or low res.

Now go to one of the folders with the hi or low res images, select all, copy, go to the "linked" image folder for AS and paste. In AS load in your images from that MAIN folder.

After this is done it is very easy to maintain hi/low res proxies for all of your image layers. Just create two versions and save them to the two hi/low res folders. Save or transfer another copy to the main image folder for AS.

Now all you do to switch from hi res to low res is to close the AS file, replace the images in the main folder by copying and replacing all or some of the images from the hi or low res folders. Takes seconds. You copy and paste from those other folders so you always have back ups.

When you reopen the AS file the images will update automatically and be the same size in the AS file as when they were imported. They are now low or hi res.