I've somewhat tired of the 16:9 ratio. My current cartoon project is being done in 16:9 and the horizontal space is so very looong, the characters often seem lost in the vast expanse of scenery.

I'm tinkering on a new cartoon project in my spare time and I'm contemplating doing it in 4:3.

Would it be a tragic mistake to make a long-ish cartoon in 4:3? (The cartoon would be sold on DVDs through the internet.)

What do you think are the downsides of working in 4:3? For example, if by some miracle my cartoon became wildly popular, would the 4:3 ratio have a negative effect on it's chances of being shown on television? Would 4:3 lower sales? Do some people only buy widescreen DVDs?

My muse says, "You are the creator; if 4:3 feels right, use it." But my brain says, "Are you kidding me? 4:3 is dying as an acceptable ratio for cartoons."

I don't know about people - most don't seem to care about screen ratios or anything - but my video post pro guys told me that TV stations tend to buy 16:9 only.
Top

Don't try to fill the entire 16:9 area. Just because you HAVE all that space doesn't mean you have to "fill" it with something.

Find that spot inside the 16:9 that is 4:3 and keep your action in there. For a while a lot of the TV shows were shot wide and cropped for standard television. Even now some cable channels don't even broadcast in wide screen or HD and "crop" 16:9 to fit.

Most TV stations, (out here), require a what they call 16:9,4:3 safe. Like Vern says, this is a widescreen format with a central 4:3 safezone where all the action is centred. Should'nt be too hard to create an image template that will display the 4:3 safezone in AS as a background with unaffected by camera and do not render selected as layer options.

I don't have any ultimate answers for your dilemma but I empathize with the frustration. I'm sure there"s some scenes and movies that may benefit from 16:9.........such as epic films,etc............but 4:3 has always seemed like a better general purpose and practical ratio to me. Sometimes with 16:9 .........if you put the main action of the scene in the center.........the extra width on the ends just seems unneccessary......and we've all seen 16:9 movies with close-ups of talking heads with the tops/bottoms of the heads cut off.I also wonder if some parts of the industry are pushing 16:9 just so we all have to buy new TV"s.camcorders.etc. and once we all have 16:9 HD TV's, we know it won"t end there.........what will be next......maybe super HD 3D in another new ratio?The speed that things change technically nowadays all gets a bit tiring sometimes and takes alot of time,money (updating software.computers, cameras.camcorders.vcr's,DVD players, etc.)and energy that could be spent more on the artistic/creative side of things.
Top

Thanks for all the replies.

Another problem I have with 16:9 is that I'm troubled by the "safe" area. It throws off my sense of composition keeping the important stuff centrally located.

Do any of you guys work in 16:9 without any concern for the central 4:3 zone?
Top

A TV station who demands their 16:9 material to be "4:3 safe" is not a quality content provider, they are just a bunch of lazy rippers. Compared to this even a DVD manufacturer who butchers widescreen films by "panning" is a trustworthy conservator.

That said, have a look at this example. The 4:3 portion of a 16:9 frame means an actual loss of 25% screen width, which is distributed evenly into 12,5% on each side. The black frame indicates 4:3 ratio, with a recent video safe area (we don't have to be as careful as in 1950 anymore).

The two circles on top mark the 1/3 position which is my most used position for composition - I don't even think about that, I just automatically place my characters there. The two circles on the bottom indicate the same 1/3 mark within the 16:9 ratio. As you can see, both sets are not really far apart from each other. Even without any further adjustment, my composition would be preserved well enough in a centered 4:3 scan of my 16:9 video. 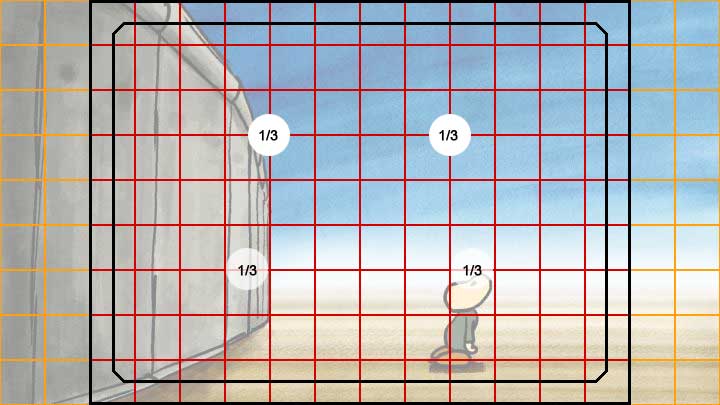 Only more extreme placements of important elements would require some adjustment. I think it's best to provide your distributor with both a 16:9 and a 4:3 (adjusted) version so he can deliver for every demand.
Top

A TV station who demands their 16:9 material to be "4:3 safe" is not a quality content provider,

. I think 4:3 Analogue will be completly phased out next year then it will be sink or swim out here

For you it's going to be a case of where you live. So, is your project going to be broadcast? If so don't listen to anyone here, find out what they want from you.

Its the same here in the UK DK. Its a pain in the arse.
http://freakishkid.com/
http://knunk.blogspot.com/
Top

Since your on the topic....

Commissioning editors since the mid-90's have stipulated 16:9, 4:3 safe - this is to future proof and maximize sales. The center-safe is because places like the UK/Australia sned different signals to the satellite/terrestrial transmitters using a device called an ARC - Aspect ratio Converter. It's a totally automated process so it has to be plug and play.

That said, there is nothing to stop you making a series where the action is off center but still within a 4:3 bounded box: If you have access to post production tools ( or are able to render two different versions) you can pan and scan the 4;3 from the 16:9 - I have done that commercially (or should I say un-commercially as it was hugely expensive exercise in a Berwick Street post house).

Personally, I love working in 16:9 and 2k which is slightly wider (1:1.85 from memory).One of the secrets is to fill the edge of screen with background soft detail and/or overlays... a colour card (blank colour) just looks boring. But add shadow to the wall or whatever, and it looks 100x better.

If your work is bound for TV though, your stuck with 16:9.

That's entirely your choice as the artist. In that specific case, since you have control over the delivery, if you don't want to make use of 16:9 then don't. However if the DISPLAY device won't SHOW 4:3 it may "stretch it" to fit.

There is another option as well... use 4:3 and just "stretch it" to 16:9 (the characters will be short and fat). But if you do that and the composition works you could have changed the composition to work with 16:9 without stretching from 4:3. Try it. If you have a scene that works in 4:3, stretch it to 16:9 and see how you could change the 4:3 layout to work wider.

p.s. My sister's family has big screen tv's. They have a home theater as well. All wide screen HD. However all the programs that are broadcast in 4:3 are "stretched". I asked my brother in law about this because I found it very annoying. He said he doesn't know how to change it and they have all gotten use to short fat actors.

heyvern wrote:they have all gotten use to short fat actors.

Ah, they watch a lot of Taxi?

slowtiger wrote:I think it's best to provide your distributor with both a 16:9 and a 4:3 (adjusted) version so he can deliver for every demand.

That's what I'll do. (Sigh.) It seems the pragmatic choice. Thanks everybody for chiming in.

I was listening to the commentary track for Ghostbusters this morning, and in it Harold Ramis, one of the actors, said something pertinent to this thread. At that particular point in the film, all four Ghostbusters are seen walking down a corridor, shoulder-to-shoulder. It's a dramatic, well-composed image. Ramis commented that in the version re-sized for television, he is cropped out of the scene.

16:9 may work fine with only one character, but when you have several characters appearing at the same time, some of them will occasionally look best occupying the danger zones near the sides.

I'd probably love 16:9 if 4:3 was eradicated entirely from the earth. As it is, having to keep two different ratios in mind while composing scenes and panning cameras causes me distress.
Top

If the shot is really important you could always letterbox it to fit into the 4:3 aspect ratio