I wanted to create a character that I could animate in close-up as well as the full figure. It’s probably a common requirement. I started my vector drawing with the face, to ensure that there was enough detail for a close-up. This occupied the full screen, enabling me to include moveable eyes, eyelids and even teeth. I used the default line thickness of 2.4 pixels, which seemed OK.

The vector layers for the character and other props, were all moved into a group (bone) layer. I used Scale Layer on the group to zoom out, so that I could get him comfortably within the TV-safe limits. It required the X and Y scale values to be reduced to 0.145 for this, with all the vector layers still remaining at X and Y scales of 1.

The next problem I encountered, was line width reduction. The "Preview" option in Display Quality (bottom of screen) that I had been using as a reference, had displayed the lines in the original width all the time. However, when I used the "Render" function (Ctrl/R) for the zoomed-out view, the outlines virtually disappeared! I exported a few frames to video and the result on the screen was exactly the same. I had to de-select "Scale compensation" for all the main layers, so that all outlines had visible thickness when "Rendered" or exported, irrespective of the zoom setting.

In the options for exporting to video, "antialiased edges" is normally selected. Logic would suggest that "Antialiasing" should be selected as the Display Quality option if we want to see the scene at its absolute best. However, I found that with "Antialiasing" selected, the lines are displayed noticeably thicker than in the video, so this is another option that gives a misleading impression! So "Render" is the only function that always gave a true prediction of how a scene will look on video.

I find it surprising and disappointing that both Preview and Antialiasing can give misleading views of a project, and the only reliable representation is obtained by using "Render." I am using an older version of Anime Studio Pro, so it would be of interest to know if these functions behave correctly in a later version?

by cheyne
What version of AS are you using? I can't dig up any pertinent examples because I haven't been on this forum for a while, but there have been various rendering/display issues covered in the past.

Also, with zooming, I tend to try and draw characters at "100%" - basically I would have a different level of detail for a close up, mid shot and far shot for example. Vectors are awesome for scaling but I try not to rely on having one drawing of a character, and zoom in/out.

by slowtiger
Some hints for production:

1. Always normalise your designs. This means that all the layers a character consists of must be at 100%. Don't ever use layer scaling while you build a character.

2. Always design all your characters in the same project, in their relative sizes to each other. Put each of them into its own top group or bone layer, so you can easily import out of this file into your scene files later.

3. During design you should test often in an early stage. Just do some basic shape, duplicate it several times, give each of these its own line width. Then do a close-up and all other different shot sizes with it and render some images. Analyse the results and choose the best line width which works for most of the shots. Most productions I worked with had only one design for all kinds of shots, they didn't do anything special for close-ups.

I do my designs in about double size of the project window in AS. This way I can ignore smaller glitches because they will be invisble in most shots.

Have a look at this example: 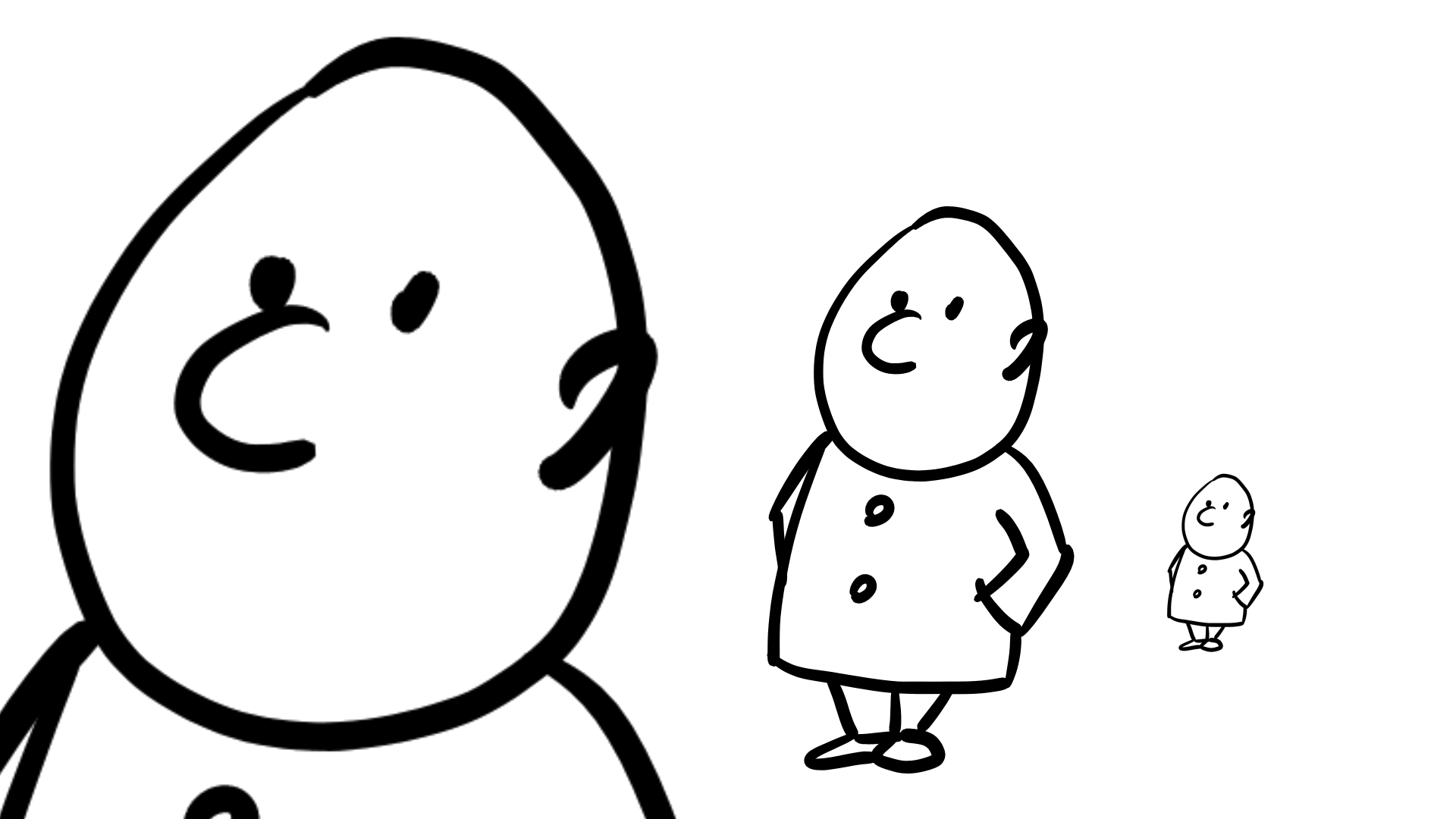 I did the middle drawing first, then duplicated and scaled it. From left to right you see the range of size characters will appear at in a film usually. Of course the line thickness changes, but it will do with everything in a scene, so you'll get the effect of a zoom lens, which is what you want. This is how about 60% of all shows and films are done.

The other approach would be to have a uniformly thin line width in every shot. Simpsons, Family Guy, and many Anime are done this way. If you watch those closely, you'll see they're using one line width for the characters and a second, thinner one for BGs. Many Anime are done in a software called RETAS which can be set to produce always the same line width, no matter which shot size or which size the character was drawn in.

If you want to do this in AS, you need to experiment as well: do as in #3, but this time switch on "scale compensation" in the top layer of your character. See which line width works best, then stick to it.

by Peter Jackson
Apologies for the delay in responding. I have had driveway contractors on the premises for the last week, so that has kept me fully occupied. Now they are creating havoc with another drive in the same cul-de-sac.

The version I was referring to was Anime Studio Pro 5.6. I also have Pro 6, which I have just started using. The problem with Preview and Antialiasing applies to both. I also have Debut 8, but find it very limited by comparison.

I would have preferred to draw everything at 100%, but my vector drawing is quite slow and I am sure that I could not create separate drawings at 100% scale for long shot, mid shot and close-up, that would all look like the same character. Scaling worked well for me, once I had discovered the effect that Scale compensation had on the outlines.

My favourite animation is "Horrid Henry" on CITV. Almost all elements in an average scene seem to have the same line thickness whether for characters or backgrounds. Where our hero appears in very long shot, outlines become thinner so they are not too dominant, but don’t seem to be less than 0.5 x ‘normal’ of the normal width. In a big close-up, they may become about 1.5 x ‘normal’ width. This variation from one extreme to the other is a tiny fraction of proportional scale.

In Anime Pro, I felt that Scale compensation overdid the width change between the extremes, because it is directly proportional. I have reduced the width of some of my Long shot outlines retrospectively, but only from 2.4 to 2 or 1.8. (Still quicker than redrawing) My character is standing on a ladder, and as it is a subsidiary element, I also made the ladder vector lines a bit thinner than those of the character just behind it.

The original issue I brought up, was not the drawing procedure, but being able to see a truly representative view in the working area. The "Preview" option ignores the effect of Scale compensation. The "Antialiasing" option show outlines thicker than they actually will be. The only view I could rely on, was carrying out a "Render". In these respects, Pro 6 is no better that Pro 5.6.

by slowtiger
It is quite unlikely that I ever use a line the way I drew it. I always tweak line thickness to get the result I want. Also I render frequently to check for everything else.
All times are UTC+01:00
Page 1 of 1
Powered by phpBB® Forum Software © phpBB Limited
https://www.phpbb.com/